Down the Coast to the Columbia River

I just helped deliver a Camano Troll to Astoria; 275-miles of fun!


The Straits of Juan De Fuca, the Washington Coast and the Columbia River Bar are all places that Oregon boaters are familiar with, and most Washingtonians avoid.  This can be a fun trip with proper planning and opens up a whole new crusing ground.

When the new owner of Big Sky, a 2000 Camano Troll 31 asked me to join him on his delivery home I was quick to agree.  I really like being on the water and Chuck seemed like a good guy to hang out with for a few days.  We watched the weather pattern, tides and potential bar crossing windows and found a couple of days that looked good.  There are great resources on the internet for all of these.


We left La Conner on a Sunday afternoon with the intention of spending the first night at Friday Harbor, just 25-miles.  The first leg put us in great position for catching a huge ebb tide the next morning that would launch us towards Neah Bay, our moorage for the night.  Sunday was gorgeous and we were nearly the only boat moving through the San Juans.  Mount Baker loomed large with clear skies.  A late dinner at Herb's Tavern in Friday Harbor tasted great!


To catch the best currents we slipped off the dock at 4:30am and headed towards Cattle Pass, picking up 1.5-knots of positive current.  Our route would take us south through Cattle Pass and then west in the Straits of Juan De Fuca past Victoria, BC and Race Rocks, all in favorable current. The water was very smooth.  We made a southern jog to cross the shipping lanes and joined the Washington side near Pillar Point, then on to Neah Bay, WA for the night.  A 75-mile day. We ran the Volvo engine at 2,000 rpm and burned about 2-gph.  Easy cruising!

Neah Bay remains a sleepy fishing village and home of the Makah Tribe.  It is a very good jumping off point for the next leg of the trip, the Washington Coast.  The Makah's provide good internet service on their docks which I used for watching the NOAA Marine Weather Forecast.   Good news; the weather pattern looked good for the next couple of days.

On the ocean, if moving port to port, I prefer to be on the water early before the land warms up and draws in an onshore breeze.  We left Neah Bay at 4:30am for our longest leg of the trip, 107-miles to Westport in Grays Harbor, WA.  We had a great day on the water.  We ran a little faster, running at 2,500 rpm, 8-knots at 3-gph.  The extra speed brings the bow up a bit and stabilizes the boat in the swell & waves of the coast.

Our arrival at Westport was at about 5pm, just in time for a casual dinner.  Westport remains a friendly fishing town with both commercial and sport fishing.  They still have a couple of dozen charter boats offering day fishing trips for a little over $100 bucks. An easily navigable bar crossing in good weather and plenty of guest moorage, it is a pleasant stop over.


That night aboard Big Sky, I felt the boat begin to rock and could hear the wind kicking up.  I tuned the VHF to the weather channel and started listening to the changing forecast.  Chuck and I walked over to the Coast Guard station (at the marina) and talked to the crew about the weather and bar conditions.  They said "you should be able to make it" and added "when you get to the Columbia Bar, be sure to call the Coast Guard for a bar report and make sure they have not closed it", neither was the response I wanted to hear.  We decided to leave her in Wesport until the weather pattern improved.

The summer weather pattern does tend towards favorable conditions on the ocean, and a few days later we rejoined Big Sky for the final leg to Astoria, OR.  The water was super smooth and we found the Camano very comfortable as we traveled south.  We were able to head directly towards the Columbia entrance and did not need to quarter the ocean swell or waves.


The Columbia Bar has the reputation as "the graveyard of the Pacific" and many boats have met their match here.  You want to cross the bar on a flood tide, and preferably with small ocean swell.   Bad conditions can be found when a large outgoing current slams into big westerly waves, causing steep waves that stand up, a dangerous situation.   We found smooth water by planning to arrive on a small flood tide.


Astoria, OR is just about 10-miles inside the Bar, and has good facilities for recreational boaters.  This leg of the trip was 75-miles.  We again ran at 2,500 rpm and the Camano was fun to be aboard.  This is where I finished my trip.  Chuck spent the night aboard and headed out early for his final run up river to Portland.  Big Sky is now in her new slip.  This summer he plans to go further up river towards the Hanford Reach and maybe Idaho.  It sounds like a fun summer cruise.


Thanks for inviting me along! 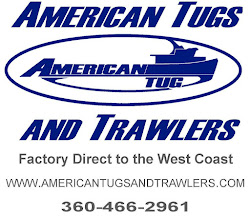